We have developed an embedded Raspberry Pi Compute Module carrier board for industrial use: the PCCB. 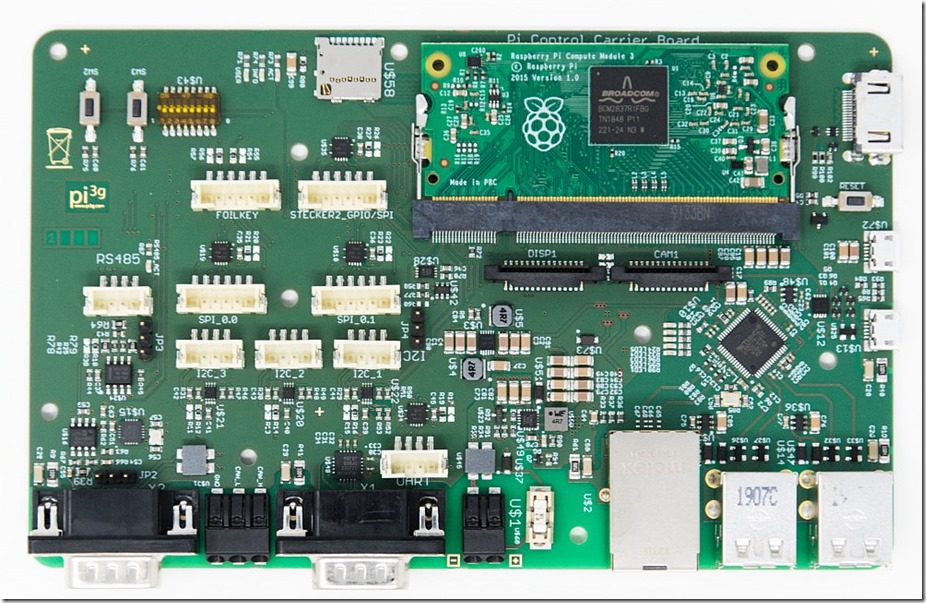 As you can see, there are three (directly) user programmable LEDs on the PCCB: USER / INFO / ACT.

These are defined in the device tree. For example, we can define the following in our device tree overlay: 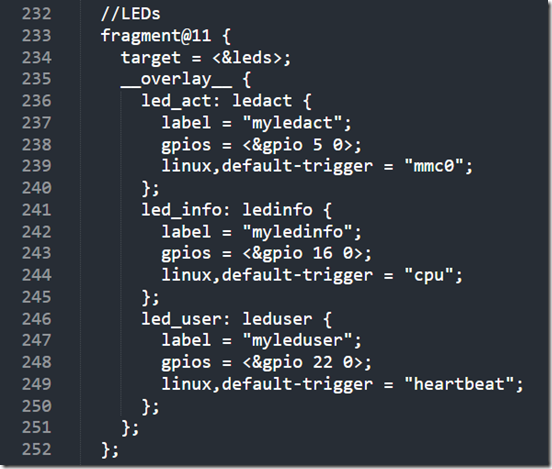 The device tree overlay source file (.dts) will need to be compiled, and will yield a .dtbo file.

This will tell the VideoCore OS which is loaded first to pass on the device tree for the particular Pi model including our overlay to the Linux kernel.

What is a device tree?

ARM devices have become increasingly more customized and diverse as compared to standard x86 devices which had standarized components.

In order to avoid recompiling the kernel and having to match every single modified hardware, a system of describing the hardware layout to the Linux kernel was devised.

It is an OS independent concept, as it is loaded into the OSes Kernel. Any operating system which wishes to, can support it.

The Linux kernel will receive the device tree, and thus knows which device is present, how it is connected, and how to talk to it (drivers are loaded depending on hints in the device tree, for example).

As a Raspberry Pi is not static hardware, but it comes in different configurations & can expose different pins, for example, and also have different add-ons (HATs), an additional add-on was required: device tree overlays.

These files allow to modify the device tree, without having to have an individual new device tree for every possibly combination of hardware you can attach to the Pi / configure the Pi to.

How do I control the LEDs?

These LEDs will turn up in the system, in the /sys/class/leds directory:

As you can see, a total of four LEDs is exposed here, three of which (myledact, myledinfo, myleduser) were added by us using the overlay!

Each of these LEDs is a directory in of itself,

which gives you control over the LED.

Remember, in Linux everything is a file / talking to the kernel is abstracted to doing operations on the filesystem (it’s actually a UNIX paradigm).

It will show you a list of which triggers can be set for it:

Note that the last trigger, mmc0 is in square brackets. This is what the LED is currently set to!

Will make the LED blink.

Note, if you now list the LED control directory again, you’ll see additional entries – new functionality which is exposed for the timer mode:

You can adjust these values to make the LED blink faster, for example:

A couple of noteworthy triggers:

Controlling the LED GPIO from my own code?

To control the LEDs from your own code, using GPIO libraries, set the trigger to “none”.

And you’ve learned something about device trees and device tree overlays, congratulations!