Today we will have a look at the Alpine Linux boot process on a Raspberry Pi in some detail. 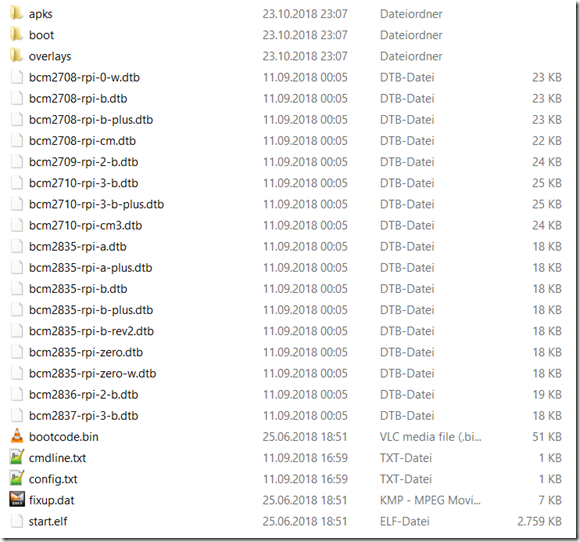 The picture shows the contents of a “virgin” SD card with the Alpine image, which has not been booted yet.

This picture shows the contents of the boot folder.

Refer to this link for an in-depth guide at different boot media:

The Raspberry Pi does not have a classical “BIOS” as in x86 based IBM PC compatible computers. It’s CPU should be thought of as an add-on to the VideoCore IV for boot purposes, rather than the other way around.

Thus, initially the VideoCore IV, the GPU, has control. It starts off from it’s own ROM (first stage), and checks the boot sources for a file called bootcode.bin. For our purposes we will assume that this file is loaded from the SD card.

start.elf will read config.txt, and set up the appropriate settings for the VideoCore IV. config.txt is a parameter file for the Raspberry Pi where you can set e.g. the video mode, overscan, audio options, MPEG codecs, overclocking settings, etc. – it is “like” the BIOS settings part of the traditional computer. start.elf itself is the firmware for the GPU, which is it’s own operating system called “VideoCore OS”.

NB: There are different versions of start.elf, including start_x.elf which includes camera drivers, and start_cd.elf – which is a cut down version of start.elf, to be used when the GPU memory is reduced to the maximum: gpu_mem=16. This latter version might be interesting for embedded systems. Refer to this site for more information: https://www.raspberrypi.org/documentation/configuration/boot_folder.md

config.txt is optional. If you use the same SD card (or image) for several Pi’s, you can set conditional filters to apply to certain scenarios; you can even apply a condition based on the serial of the Raspberry Pi, or on the state of a GPIO. There is also the possibility to include additional files into the config.txt. Taken together, you get a quite powerful system for the basic configuration of the Raspberry Pi.

Of course, there are also boot options in config.txt, which control how the further boot proceeds.

start.elf then loads the kernel (as specified by config.txt / defaults), and launches it with cmdline.txt as kernel command line .

have a look at:

to read more about the available boot options.

Let’s have a look at the config.txt which ships with Alpine’s 3.8.1 ARMHF release:

Note: the configuration used in Alpine does not specify a second parameter for the initramfs (address at which to mount the initramfs); thus it is not advisable to copy this 1:1. That being said, it seems to work, probably defaulting to a safe default!

The Kernel and the Initramfs

Depending on the config.txt settings, the correct kernel will be selected and loaded into RAM. Once it is loaded, the ARM processor core(s) (are/is) released from reset so (it/they) can boot the kernel.

It will be passed the contents of cmdline.txt as kernel command line. start.elf will also pass additional parameters of it’s own, for instance setting DMA channels, the MAC address of the SMSC LAN chip, etc.

let’s have a look at Alpine’s default cmdline.txt:

This loads the modules

NB: module names may contain both – and _, these symbols can apparently be interchanged.

” The initramfs command specifies both the ramfs filename and the memory address to which to load it. It performs the actions of both ramfsfile and ramfsaddr in one parameter. The address can also be followkernel (or 0) to place it in memory after the kernel image. Example values are: initramfs initramf.gz 0x00800000 or initramfs init.gz followkernel. NOTE: This option uses different syntax from all the other options, and you should not use a = character here.” – Raspberry Pi Documentation

There will be a kernel message like this “[ 0.143709] Trying to unpack rootfs image as initramfs…” in dmesg, showing that the image is being unpacked.

The initramfs allows the Linux kernel to add modules, and perform other tasks in preparing for the mounting of the actual file system. It thus makes for a very versatile boot system, without having to recompile the kernel / add overhead to the kernel. For instance for users with an encrypted filesystem, initramfs will ask for the passphrase before it can decrypt and mount the file systems.

Depending on the CPU in your Raspberry Pi, different initramfs files will be used, as set in config.txt:

The initramfs file can be extracted using, for instance, on Windows 7Zip. (You have to extract it twice: the first file contains a gzipped second file)

initramfs images can be in different formats, depending on which algorithms were compiled statically into the kernel (e.g. gzip / bzip2 / LZMA / XZ / LZO / LZ4). 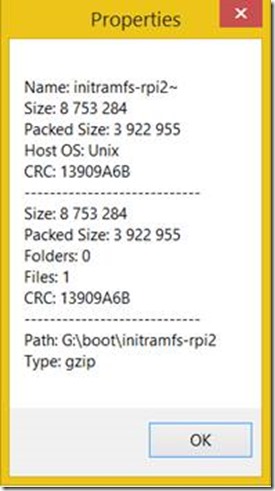 This second file packages a folder and file structure, which you will recognize if you have used Linux before. It is in a special format, “cpio“, which is similar to tar. 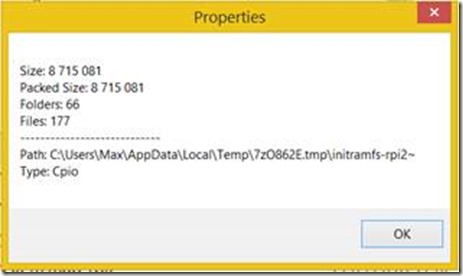 if you are curious, you can read more about cpio here:

This is what the file contains: 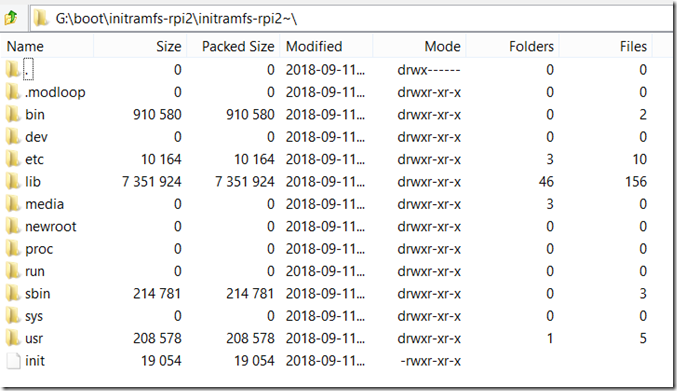 in bin, it contains:

in sbin, it contains

the init file is launched by the Linux kernel as first process, and basically sets up Alpine.

Here is the tool used for generating the initramfs for Alpine:

this is a sequential excerpt from what the init script launched from the initramfs does:

Tip: try changing “quiet” in cmdline.txt to “noquiet” to get a more verbose boot, and see many messages from init

Please note: The apkovl is mounted before modloop and before installing the packages. This allows the apkovl to configure which packages are going to be installed, amongst other things.

how it is mounted

The right file for your system is determined in the script /etc/init.d/modloop in the function find_modloop()

The result of uname -r is checked against the directory modules/ – the appropriately named subdirectory needs to be in it.

This way the right modules for your kernel are used (uname -r prints the kernel release).

Symlinks are created from /lib/firmware to /lib/modules/firmware, and /lib/modules is symlinked to /.modloop/modules

Hint: if you want to patch the Raspberry Pi 3B+ WiFi firmware, you have to put it into modloop.

To explore modloop’s contents, you can use (tested on a mint system):

It contains firmware and drivers. 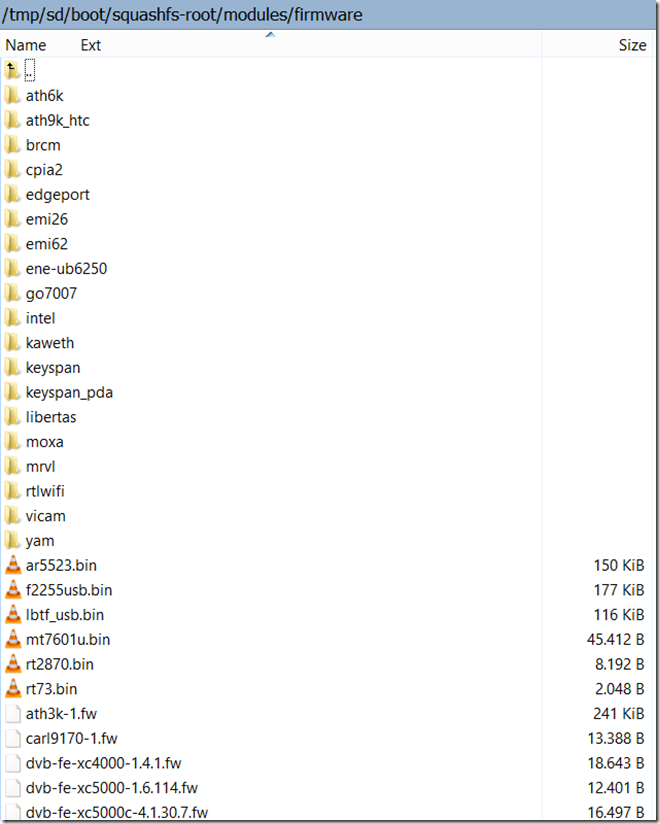